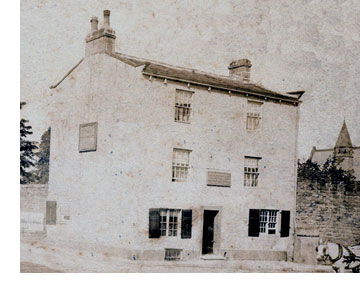 According to the late historian, Frederick Morrell, the Royal Oak probably dates back to the 17th century. There is a date stone on the Bridge Street frontage which reads: “Royal Oak c1651.” It was originally of three storeys, whereas today it is of two. The ground floor windows are larger than the old ones which consisted of small panes and outside wooden shutters. The main entrance to the property today is on Clapgate but originally it was the doorway on the Bridge Street side. When the interior alterations were made, additional buildings were added, one of which included the smoke room. The walls are some two to three feet in thickness. A building opposite was used as stabling but was demolished in the 1920’s, therefore widening the road and making way for two new shops.

A little more on Harry Waites, who was also thought to run the Rose & Crown at some point (clarification needed). Harry Waites, sometimes also called Jim Waites, was an English football coach active in the Netherlands in the 1920s. Waites, was also a rugby player in his youth.

He joined the British Army and retired in 1907 but was called up again in 1914 for the mobilization for the First World War. His unit had to flee to the Netherlands after the Siege of Antwerp. He was captured and sent to Prisoner-of-War camp at Groningen in the Netherlands, alongside footballer Arnold Birch. There was a highly regarded internal football league among the POWs. 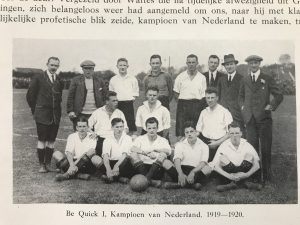 Waites was on the coaching team of the Dutch national football team at the 1920 Summer Olympics. In 1921 he was also a one-time coach of the Dutch national football team replacing Fred Warburton. In January 1921 he became trainer of “LAC Frisia 1883” and in 1924 of Feijenoord. In 1924 he won the club’s first national title with Feijenoord. In April 1925 he was fired for poor results. Waites returned to England and in August 1925 became a trainer of Leeds RLFC 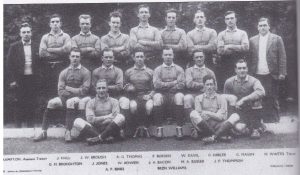 and a masseur for Yorkshire County Cricket Club. Here’s Harry with the 1925/26 RLFC team. He’s back row extreme right. Photo courtesy of Graham Williams, who found it in  ‘Images of England: Leeds Rugby League Club’, compiled by Phil Caplan and Les Hoole, which was published by tempus in 1998.

For the last ten years of his life he ran a pub in Otley. His death was reported in the Yorkshire Evening Post on October 3, 1938.

There is a book – “Harry Waites ‘Boys’ – the first champion coach of Feijenoord” A fantastic long read (ed – so I’m told!) about the trainer who made Feijenoord champion for the very first time in 1924, the Englishman Harry Waites. His life story, reconstructed by Jelle Simons, shows how war, forbidden love and a good dose of bluff gave the club from South its first champion coach. Mandatory reading for every Feyenoord football fan.

Though not possessing an inn sign, acorns and oak leaves may be seen above the entrance; the same symbols of the Royal Oak being embodied in stained glass windows.

It closed as an Inn c1971 and after being closed for several months, proposals to convert the Royal Oak Hotel into offices for Barret Chamberlain & McDonnell, solicitors, were put forward which were approved by the Development Committee of Otley Council. Because it was a listed building, any changes made had to have planning consent.

In 2012 the property is occupied by Savage Crangle, solicitors.