It is thought that this building dates back to the 17th century with the exception of a wing down the passage at a later date. The north-west wing on the right down the passage appears to be a later addition and was apparently the Servants’ quarters.

This Pub started out life by selling wine, spirits, cigars and being an ale and porter bottler established by the Deighton family in 1800. They stayed there for many years and in 1895 the proprietor was Edward Deighton Barret who remained until 1925 when John Grenville Dinsdale took over the licence, followed by Herbert Dinsdale. It became known as Dinsdale & Co., wine and spirit merchants. It eventually changed its name to “The Vaults” and subsequently “Melbourne Vaults.” 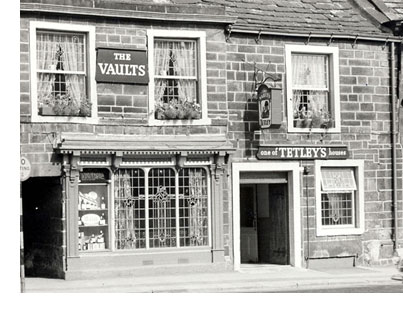 In 1942 the wholesale and retail business was discontinued and the property purchased by Leeds & Wakefield Brewery Company (re-named the Melbourne Brewery), the first tenant being Mary Kyte, followed by Clara Ball and in 1953 Jack Stott.

When it was known as Deightons Vaults it was at some time referred to as the “Ellicker Pike,” being the headquarters of the local Fishing Club. “Ellicker” is the Yorkshire dialect word for vinegar, and of course a pike is a big course fish, so presumably, Pike cooked in vinegar would be a delicacy at the annual dinner of the Fishing Club, or it could have been a pike reserved in vinegar as one of the trophies in the?

It ceased to be a Pub in 1973 and in September of that year, the former Vaults public house was bought by the firm of Messrs Ogdens of Otley for £32,000 at an auction sale held by Dacre Son & Hartley at the Royal White Horse Hotel. It was converted into two shops 2a and 2b Boroughgate.

In 2012, Vision Value occupies 2a, and 2b is still vacant following Suedecraft vacating in late 2010.