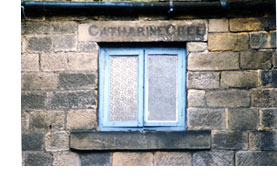 Not very much is known about The Green Man. In 1870 Samuel Green was Licensee and on a lintel through the yard to the rear can be seen the name “Catharine Gree.” This can only be thought of as being Catharine Green the wife of Samuel.

In February 1880, Wm Walker & Sons gave Notice to Quit to the Representatives of the late Sam Green. On the 20th October in the same year, Messrs. E. & A. Walker granted a Lease to Richard Taylor.

At a meeting of the local board it was announced that a scheme was on foot for converting the Green Man Inn, in Kirkgate, Otley, into a post office. It was thought the site was a very good one, as the position was central. Complaints were made of obstructions in the market place and other thoroughfares on market days.
http://www.ilkleygazette.co.uk/features/featuresnostalgia/features_cross_old/1704836.Scheme_to_convert_Otley_pub_into_post_office/