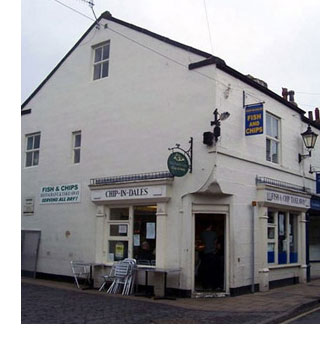 The Star Inn on New Market can be recognised by the doorway placed at the angle of the corner. This Inn only came into being during the 19th century on premises which were domestic. John Jowett was the innkeeper around 1870, followed by George Lofthouse in 1882, and John Thomas Bowman from 1888 to 1896. Ada Fawcett was tenant in 1896, Herbert Varley in 1897, the latter transferring to the George Inn a year later. His successor at The Star was Tom Dawson, John F. Coulson following in 1904, John Daniel Firth in 1906, and Everett Myers in 1908, who retained the tenancy until 1920 when the inn finally closed down as the licence was opposed by the Otley Division, along with that of The Cock and Bottle on Bondgate.

It became a Fish & Chop in early 1984 which was run by Larry Goodman (aka “Larry the Chip”) and known as Newmarket Fish & Chip Shop. Orchard Developments took over the property after Christmas 1988 which then remained empty for a couple of years until it re-opened as Chip-in-Dales in February 1992 as a Fish & Chip shop and restaurant, and still remains there in 2012.